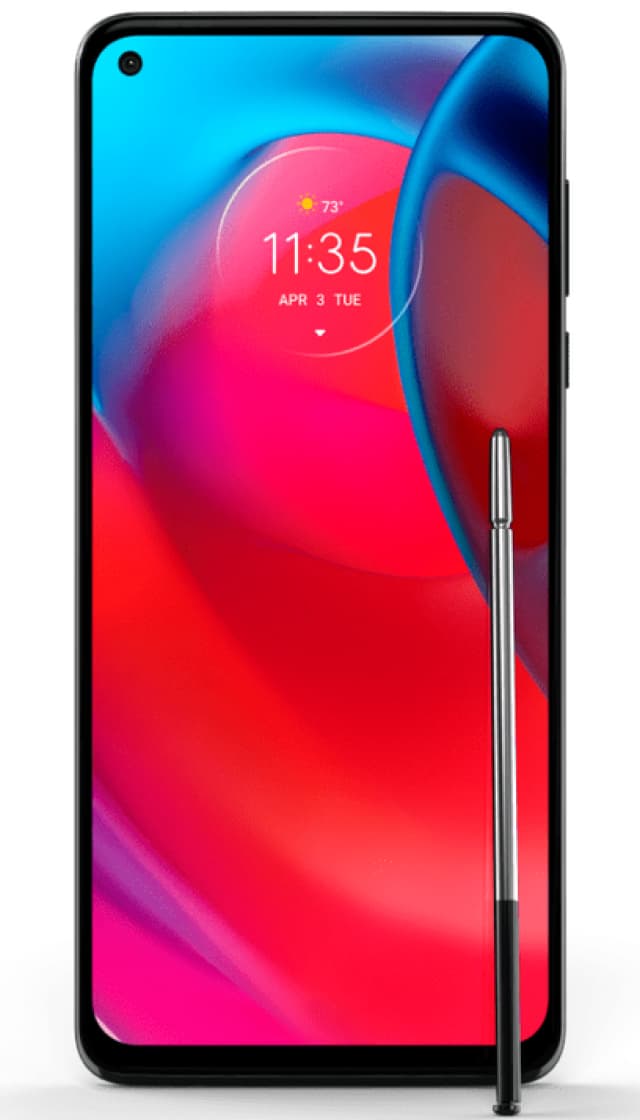 This is a smartphone on Android 11 with a very fast and productive processor, with a huge touchscreen size, with a very cool camera that has 4 modules (48 MP Wide, 8 MP UltraWide, 5 MP Macro, 2 MP Depth sensor), and the front camera here turned out to be very high quality, which can make beautiful selfies. And Motorola Moto G Stylus 5G has such features: cut-out notch above the screen (so that a selfie camera, speakers and additional sensors are placed there), dust and water protection and supports stylus.

New smartphone from the company Motorola got the name Motorola Moto G Stylus 5G and was announced in June 2021. This model is released in the series of smartphones Motorola Moto.

Smartphone Motorola Moto G Stylus 5G works out of the box under the operating system Android version 11. According to our information, this model has not received any updates to the software, and if you want to choose some other smartphone on this version of the OS with support for updates, then look at these smartphones on Android 11 in our catalog.

According to the claimed characteristics, the Motorola Moto G Stylus 5G did not receive support for two SIM cards, but on the other hand, it supports 5G networks. One of the advantages of this technology is that the smartphone will be able to receive data at very high speed (up to 100 Mb/s). This model may not be suitable for you, but you can easily choose any other smartphone with support for 5G networks (from the most affordable ones to flagships for $1,000 and above).

The larger the screen, the larger the case. But in addition to the width and height of the hull, its thickness is important. At Motorola Moto G Stylus 5G the thickness of the case is 9.4 mm, which turns out to be very thick. Today, there are many smartphones with a slim body. In addition, the screen area in relation to the body area affects the positive feeling of the phone in the hands. This model has a screen area of 80% to 90% of the body area (watch all smartphones with a screen from edge to edge). And one more thing, the screen area is increased thanks to the upper cutout above it, while the body area remains unchanged. Motorola Moto G Stylus 5G received a cutout in the form of a small hole at the top of the screen for a selfie camera and multiple sensors. Check out detailed photos of this smartphone for a better understanding of how it looks in real life.

The battery and the operating time also depend on the screen size. At Motorola Moto G Stylus 5G installed battery for 5 000 mAh, which is very, very good, this battery will last for a long time.

Of the features of the case and form factor, it is worth noting protection against ingress of water and dust inside the body and, built-in case, stylus. This model could become a flip smartphone and get into our catalog on a separate page, where all phones with flexible screens are collected. Unfortunately, this did not happen. And therefore, if you are interested in smartphones with such top-end characteristics, we advise you to look at them in our catalog and get a deeper understanding in which direction the entire mobile electronics industry is moving. Perhaps, in a couple of years, every second person on the planet will have such flip smartphones.

The smartphone Motorola Moto G Stylus 5G got the main camera with multiple modules (smartphones with four cameras): 48 MP Wide + 8 MP UltraWide + 5 MP Macro + 2 MP Depth sensor. And there is also a front camera that has one module: 16 MP Wide. If you judge only by the number of megapixels, then the main camera is super-camera, which is installed in smartphones. But the frontcamera very good, which will surprise you with its high quality shooting of selfie. It seems that we have already written many times that before buying you need to see a smartphone and hold it in your hands. And speaking about cameras, I would like to repeat the same idea once again — look at the reviews about this model, see examples of photos taken by this smartphone. It often happens that in search of a low price, you buy a model with a camera of tens of megapixels, but the photos and videos will not be of high quality.

And write a few words about the performance of Motorola Moto G Stylus 5G. Of course, the very first thing that will be discussed is the processor. The model received a 8-core processor Snapdragon 480 5G (8 nm).

The second performance characteristic in our opinion is the amount of RAM. The Motorola Moto G Stylus 5G has 6 installed on the RAM.

The built-in flash memory of this model has the volume 256 GB The manufacturer did not forget about the support of memory cards in the smartphone. Here you can install a card microSDXC up to  GB.

Price for Motorola Moto G Stylus 5G: buy or not to buy?

So we told about masthead powerful smartphone Motorola Moto G Stylus 5G with a huge screen, chic main camera and very good selfie camera, and still there is a super-capacious battery.

All these characteristics in 2021 may be good, but the time goes by and the smartphone will somehow become obsolete in half a year of the beginning of sales. And by the way, to sell it start in June 2021 at a price of $400. This is the official price from the manufacturer without taxes and fees, so it can differ in each country, and not only for different sellers.

Before you buy Motorola Moto G Stylus 5G, be sure to check out all the photos and video reviews on it, or better still go to the offline store (electronics supermarket) and twist it in your hand. And already then, based on the emotions received from the smartphone, make the decision to buy.

And if Motorola Moto G Stylus 5G is not already sold, when you are reading this text, then do not be upset. We advise you to always visit the page DROID smartphones, where we collect only the most current models on new versions of Android OS. 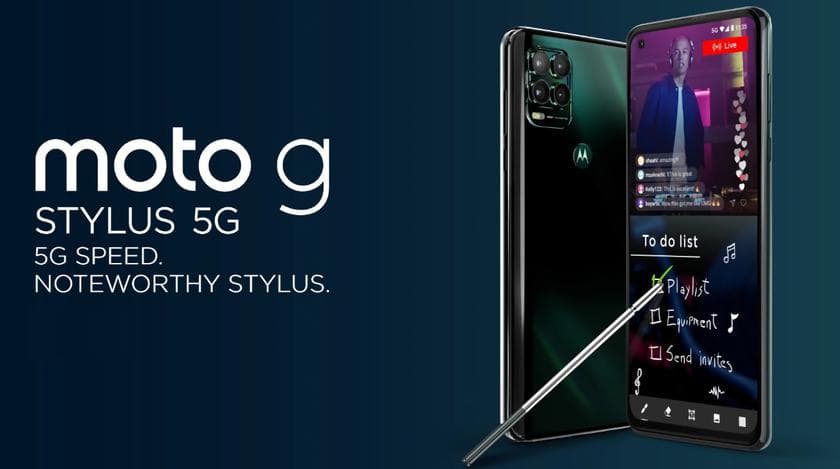 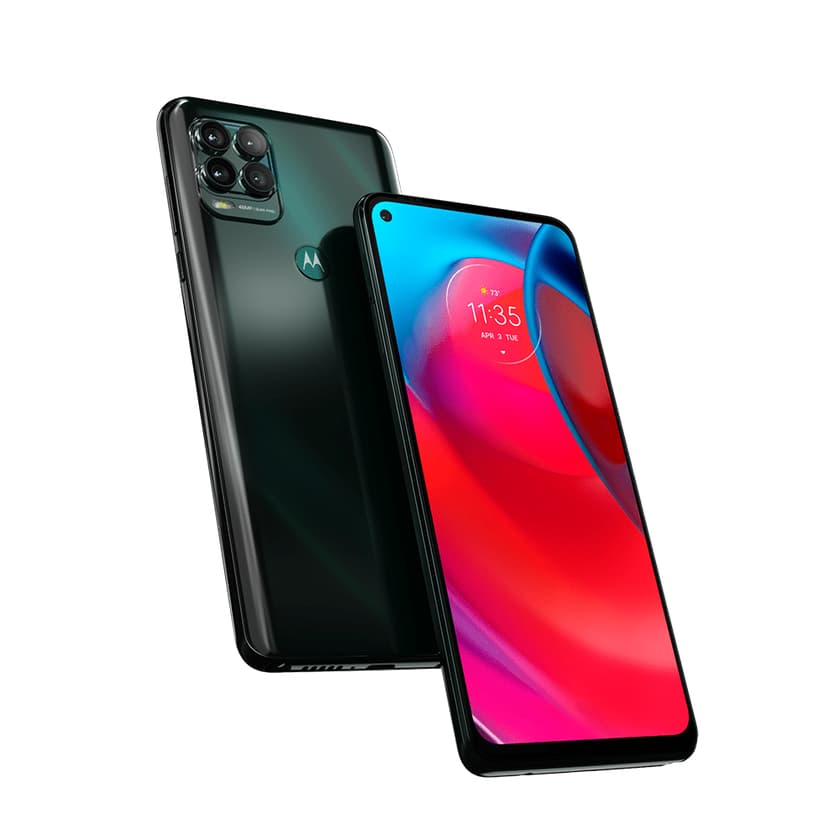 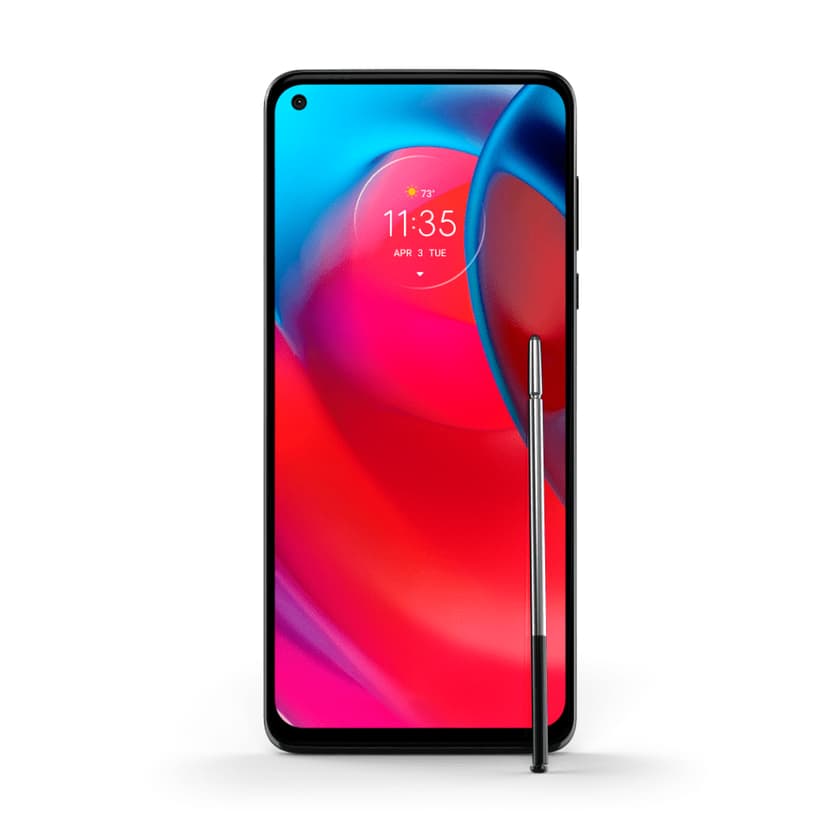 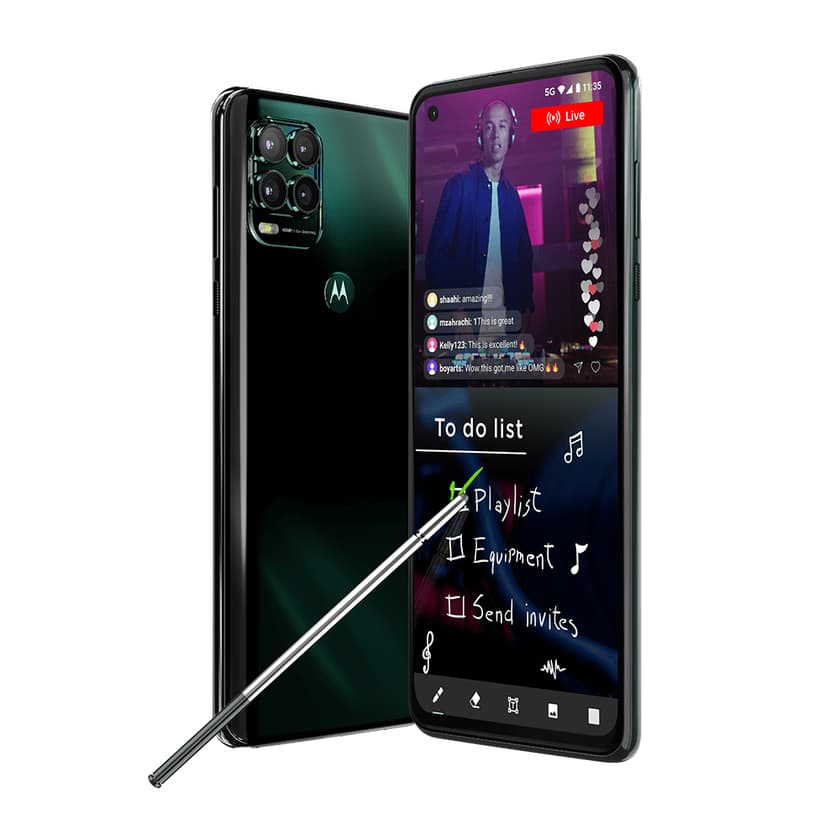 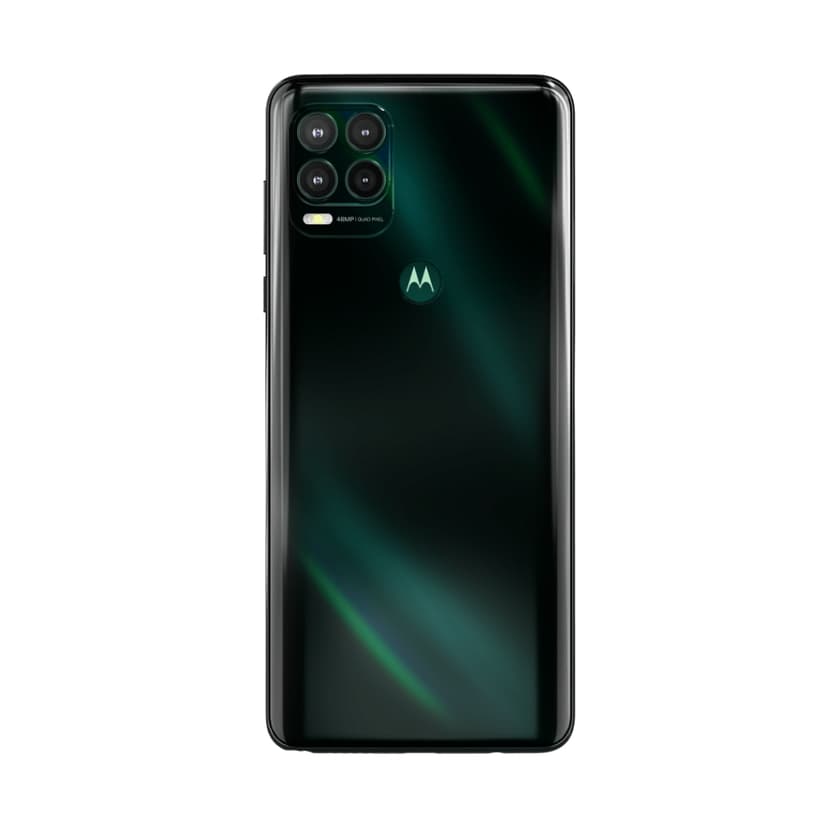 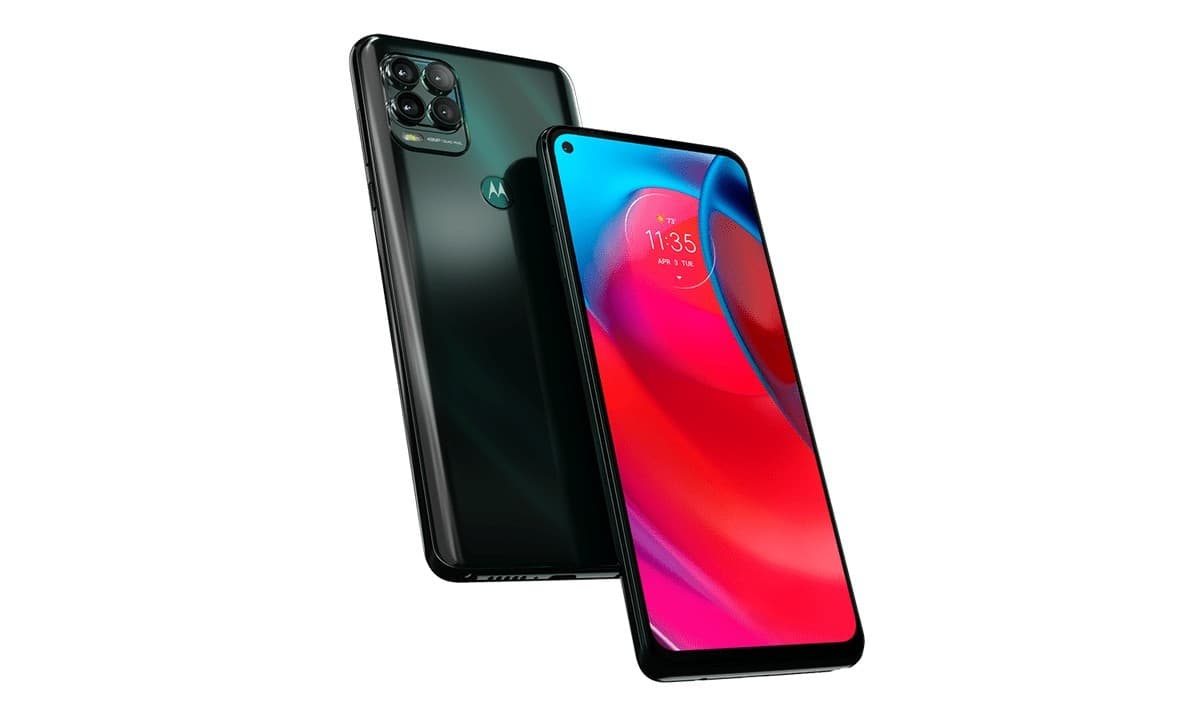 [EN] Moto G Stylus 2021 Review: The Only Motorola Phone Worth Buying This Year!

Motorola Moto G Stylus 5G announced: new 5G smartphone with stylus and quad camera, sales start in the US for $400

The new smartphone runs on Android 11 with a proprietary My UX interface. Communication capabilities: Wi-Fi 802.11 a/b/g/n/ac, Bluetooth 5.1, GPS module. Unfortunately, the model did not receive an NFC module for contactless payments. But there are a 3.5 mm audio jack for headphones, and a USB Type-C 2.0 connector.

Competitors for a similar price

In the first half of 2021, you can choose a smartphone with similar characteristics, but for less than $400. Let’s take a look at these models:

All of these models from the list do not support stylus, unlike the Motorola Moto G Stylus 5G. If this is not important for you, then it is better to buy Motorola Edge S, which is $100 cheaper, and at the same time has a better Snapdragon 870 5G processor (7 nm), dual front cameras and a more advanced main camera (64 MP, not 48 MP).