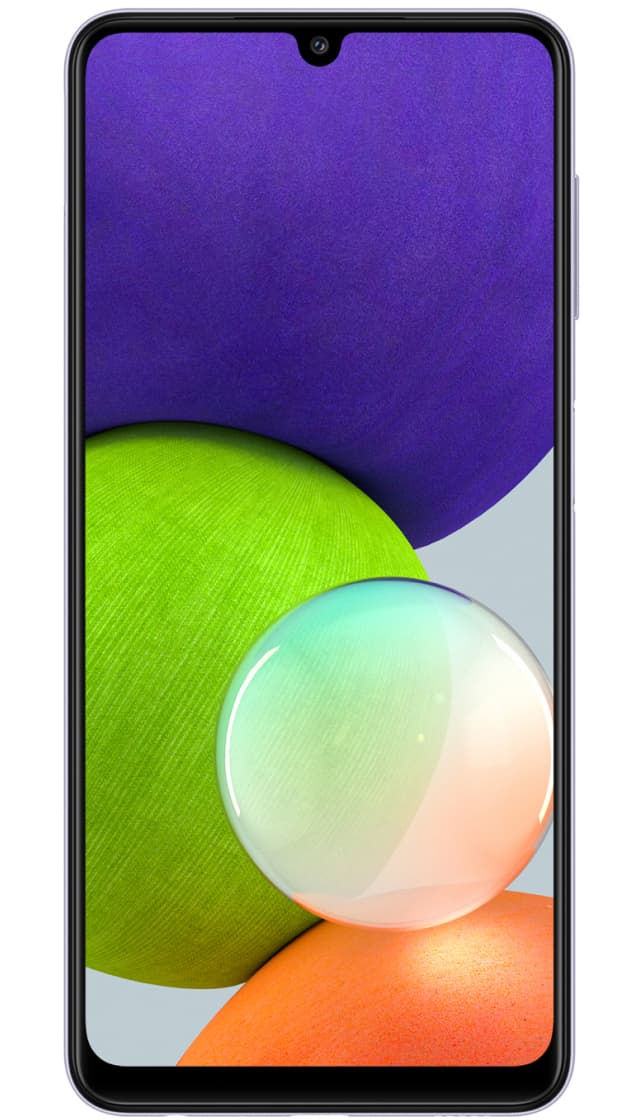 This is a smartphone on Android 11 with a very fast and productive processor, with a huge touchscreen size, with a very cool camera that has 4 modules (48 MP Wide, 8 MP UltraWide, 2 MP Macro, 2 MP Depth sensor), and the front camera here turned out to be very high quality, which can make beautiful selfies. And Samsung Galaxy A22 has such features: a slot for two SIM cards, cut-out notch above the screen (so that a selfie camera, speakers and additional sensors are placed there).

Shop now or just choose the price Samsung Galaxy A22

The most important thing you need to know before buying is the version of Android on which the smartphone is launched “out of the box”. And Samsung Galaxy A22 works on Android 11, that by the way is not so bad as for smartphone of 2021. But here it is still important to know whether this model is updated to a more recent version. Our novelty Samsung Galaxy A22 updated to version 12.

Perhaps it will be important for you that the smartphone was a dualsim. Then we can make you happy, because Samsung Galaxy A22 works great with two SIM cards. And since 2020, after the official launch of 5G networks, it has become very important for most buyers that the new smartphone has high-speed mobile Internet. It so happened that Samsung Galaxy A22 does not have support for fifth-generation networks and cannot provide you with super-fast Internet at a speed of up to 100 Mb/s. If this is important for you, we recommend that you go to the catalog page, which contains all 5G-smartphones on Android.

In the case Samsung Galaxy A22 thickness 8.4 mm is placed battery for 5 000 mAh and a very large Super AMOLED touchscreen with a diagonal 6.4″ and refresh rate 90 Hz. As you can see in the official photos, the body has a neat little cutout in the screen that houses the selfie camera. Thus, the manufacturer decided to increase the screen area without increasing the physical size of the smartphone body. The screen is very close to the edges of the case, which also improves the ergonomics of using the phone with one hand. This model could become a flip smartphone and get into our catalog on a separate page, where all phones with flexible screens are collected. Unfortunately, this did not happen. And therefore, if you are interested in smartphones with such top-end characteristics, we advise you to look at them in our catalog and get a deeper understanding in which direction the entire mobile electronics industry is moving. Perhaps, in a couple of years, every second person on the planet will have such flip smartphones.

Let′s briefly describe the cameras in Samsung Galaxy A22. The main camera got several modules (smartphones with four cameras): 48 MP Wide + 8 MP UltraWide + 2 MP Macro + 2 MP Depth sensor. Why, for example, has multiple lenses in a smartphone camera become the absolute norm on the market today? Because with these smartphones you can take beautiful portraits with blurred backgrounds (this is called the Bokeh effect). And manufacturers have also learned to make software enhancements to photography based on the analysis of frames from each lens. It seems that this is exactly the case when it is better to see once than read about it a hundred times. Therefore, we advise you to take a few shots yourself with the camera of this smartphone.

The front camera has one module: 13 MP Wide. This is a very good selfie-camera, which will shoot high-quality photos, so you share them with your friends in social networks and not only. This model has a front camera as usual at the top of the screen, like 99.9% of all smartphones. But, if this makes you bored, then we can offer smartphones with pop-up front camera. In these models, the front camera is located inside the body and goes up only when you activate the front camera mode. It sounds interesting, but how convenient it is and how long this mechanism will work is not yet clear.

And write a few words about the performance of Samsung Galaxy A22. Of course, the very first thing that will be discussed is the processor. The model received a 8-core processor Helio G80 (12 nm).

The second performance characteristic in our opinion is the amount of RAM. The Samsung Galaxy A22 has 4 installed on the RAM, but you can choose the version with 6 GB of RAM, to make the smartphone work even faster.

The built-in flash memory of this model has the volume 64 GB, but you can choose the version with 128 GB.

Price for Samsung Galaxy A22: buy or not to buy?

A huge new smartphone Samsung Galaxy A22 you can choose and buy in any store. Sales start at June 2021.

And if you are not suitable for buying Samsung Galaxy A22, then choose any other smartphone from directory of current DROID smartphones. 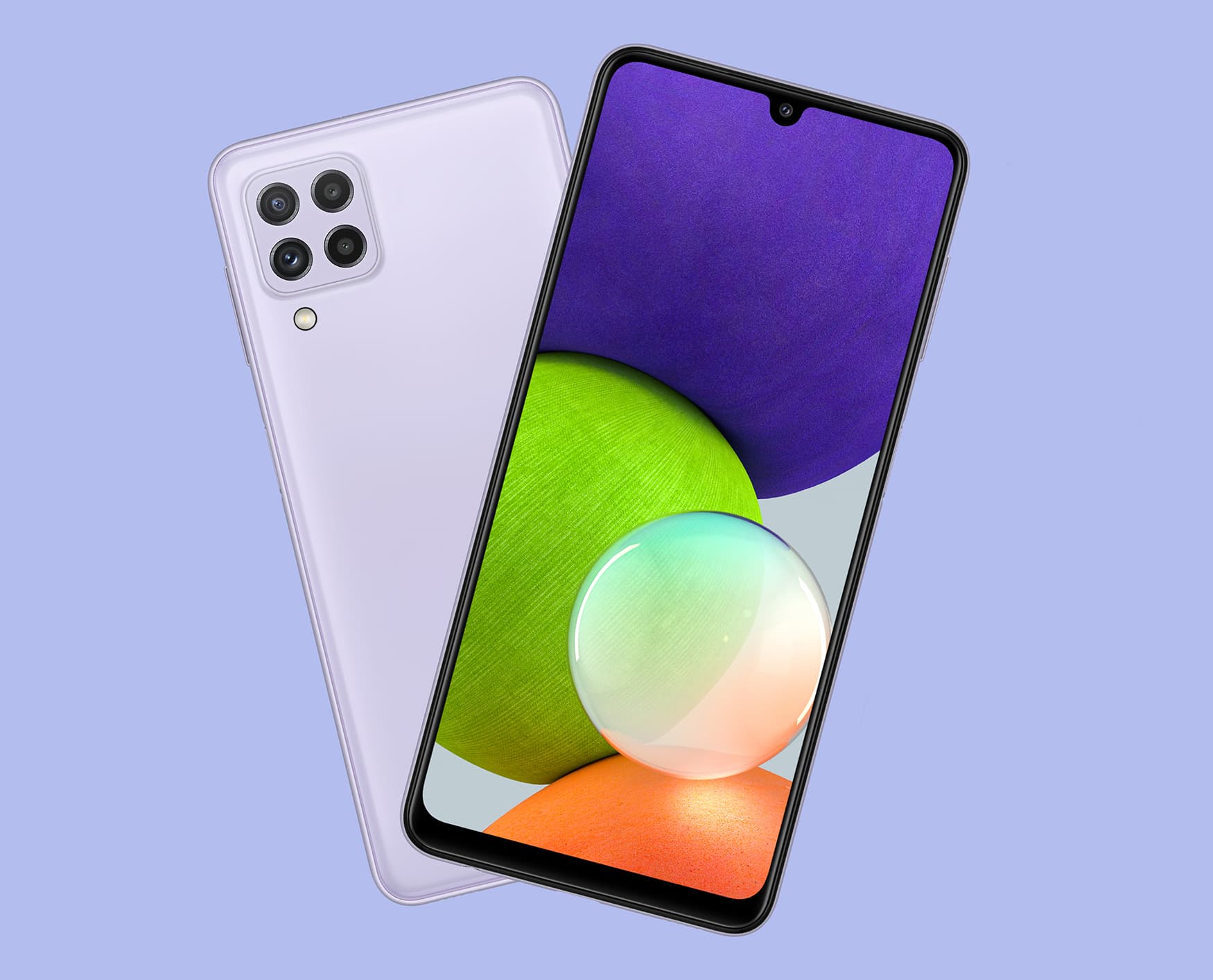 Samsung Galaxy A22 announcement in two versions: 5G or 4G

The characteristics of these models differ much more than just support for 5G networks. For example, they have completely different screens (technology and diagonal are different), the number of main camera modules, different front cameras, processors. And the cherry on top — the Galaxy A22 5G doesn’t have a memory card slot, although the 4G version does.